When I first started school in August, I expected there would be more hard work. But I soon realized it was mostly the same as sixth grade when it came to the homework. But in general seventh grade was/is a blast.

By September I grew accustom to going to bed late. (11:30 to midnight late) But I like going to bed late so it was alright. Eventually I realized that going to bed early was pointless. The main keys I picked up in seventh grade was that drama is a waste of time, science never gets easier (they just keep on adding stuff). And that learning a foreign language is really hard. If I did it again I would just wait for high school. How do they expect me to to remember a different language throughout the years?

As the year comes to a close I will try to raise my grades. If I had to do it again I honestly couldn’t imagine changing anything except my work ethnic. My advice to incoming sixith graders is just to not get into trouble, get good grades and have fun. 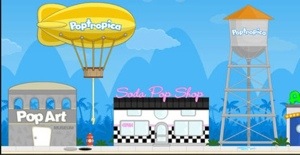 When I was a child I didn’t really have a favorite toy. But I did have a favorite website: Poptropica. On Poptropica you can create a avatar. You have missions, the first mission you have to go to different ages/ the past. In all of the ages there is a piece missing from it. You have to find what is missing and replace it, so the present isn’t changed.

I would play it all the time sometimes I wouldn’t even be trying to complete the mission. I would just hop in the yellow blimp and travel to different islands.

If your looking for something to do in Austin, Texas I suggest you go to The Oasis, its a restaurant that sits on the side of a hill. It’s a really fun place to go with friends and family.

They best timed to go there is before the sun sets. If you sit outside on patio over looking Lake Travis you can watch the sun set with all of its pink, red and orange colors. Overall The Oasis has pretty great scenery other than the sunset, when it gets pretty dark and  the sunset has faded away. The lights turn on outside to light up the night sky the whole atmosphere changes, and you can feel the party vibe. Across from you the lake looks really exotic and you cant believe your still in Austin, Texas.

I didn’t think that I would enjoy listening to the songs from the play…but it turns out I do! I think it’s a really interesting story so far. Will Christine choose the phantom or Raoul? And it seems like one of those very hard stories to find that’s not so predictable.

I think that the songs are so catchy my favorite by far is “Masquerade” I’m honestly thinking about downloading it on iTunes. Sense we’ve been listening to it in school I’ve been thinking about maybe one day going to see the play. That’s going on my bucket list.

One reason I don’t like them is because I think there kinda pointless. I think our school has them for no reason. Although we do get to get out of class and nothings better than getting out of class, there’s just no reason for it.

Also, pep rallies are cheesy. You have to be loud and have “school spirit”. The only people that cheer because they are having fun is 6th grade, 7th grade dosen’t even care about what’s going on and 8th grade is usually just making front of all the activities.

Plus, they can be so boring and most people don’t even pay attention. You just talk to your friends and play on your phones instead of having “pep”.

It was a cold,rainy and dark. The wind made the trees shake so much that you heard them scratch the windows. Leaves blew down off the trees getting stuck between the silent pauses of the fast wind then landing softly upon the cold ground wet from the rain.

Inside the lightening light up the house as the spears of light comes down and touched the land beneth it, quieteing the people inside. The movie kept playing and the children kept listening. Trying to ignore the strom brewing outside.

My favorite holiday is by far Christmas. And it’s not because you get presents it’s because I think everyone and everything is nicer. Theres lights everywhere or red bows on street lights. Go into any store and I can guarantee that you hear christmas carols. The weather gets colder and it is the only time where I seriously enjoy Texas.

Winter is my favorite season, so I wish it would start snowing or that I lived somewhere that was cold year round. When it is cold outside I would love sitting by the fire place while drinking hot chocolate with the big marshmallows. It sounds very cliche but I would still enjoy the whole experience of frosty windows and snow covered streets.

My favorite room in my house is the room you see when you first open my front door. There’s tan tiling, with this one square outlined with different tile patterns. That’s where our slick black grand piano stands, but that’s not it.  There’s this huge window that basically makes the whole wall transparent.

On sunny days the light shines through it and it compliments the piano. Its so bright and sunlight beams everywhere. On dark rainy days you can hear the rain fall on the window pane and see the rain make the water in the pool move. The whole house is dark and quite and lightening is outside. And when the lightening crashes down across the city, for a split second the whole room lights up and comes alive.

When it rains I think that everyone and everything is calmer. I like how it’s dark, how the streetlights look dim and barley visible. I don’t necessarily like the hardcore thunderstorms though. I just like the dark days and how you just want to watch tv and relax.

Sometimes I think the sounds of rain are soothing how you can watch it through windows or even watch it land in your pool. How it makes the water bounce and move in general its pretty sensational. But you can’t forget the rain in general, how it falls slowly and then all at once.